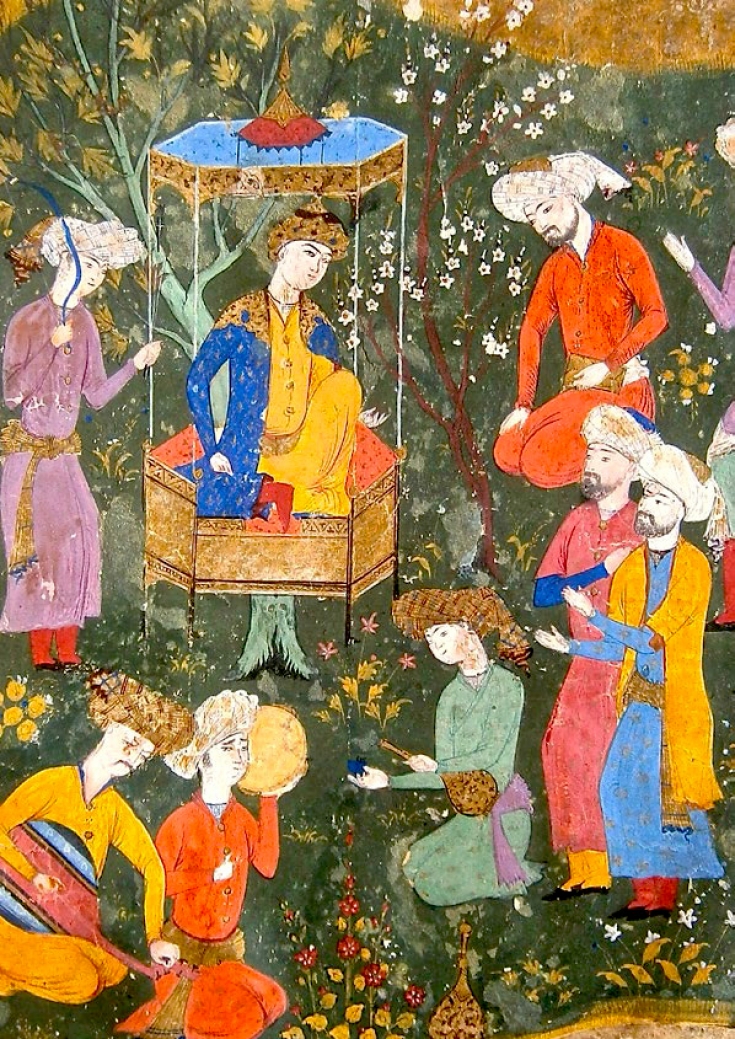 The manuscript is a very generous gift donated to the Centre for its inauguration on 24 May 2014 by Ali Akbar Javad, a private collector who migrated to the USA in 1975 and resides in Washington DC. On his suggestion the manuscript is called the ‘Shahriar Shahnama’ in memory of his late brother Dr. Shahriar Javad, who was a pioneer in the field of Operation Research in US Logistics. Shahriar Javad passed away on 2 March 2014.

Provenance: the manuscript comes through the Nadeau auctioneers from the estate of a lady called Elizabeth, née Robertson, also known under several other surnames (Miller, Weicker and Fondaras) as a result of her three marriages. She died on 29 August 2012 at the age of 96. In honour of all three husbands she established scholarships which are in great demand.

She was born as Elizabeth Temple Robertson in Boston on 18 March 1916.  After the death of her first husband, Charles E. Miller, she moved to Paris, where she stayed for 10 years. In France, she married Theodore Weicker Jr., of the Squibb pharmaceutical family, and the father and the grandfather of two Connecticut Governors, Lowell M. Palmer Weicker Sr. and Lowell Palmer Weicker Jr. (b. 1931), who also served as Senator and Republican candidate for the presidency in 1980.

When Elizabeth and her second husband returned to the United States she became a well-known socialite, organising generous parties in their house in the East End of Long Island. The most famous was her annual Bastille Ball. As a great propagandist of French culture in America, she was appointed chevalier of the French Legion d’Honneur in 1989, officier in 2002 and commandeur of the Legion d’Honneur in 2009.

The manuscript clearly arrived in the family library collection through Lowell M. Palmer Weicker Sr. (1903-1978) as seen from his ex libris on its flyleaf, although the circumstances of its acquisition are not clear.

It is known that before 1901 it was in London as the manuscript featured in the Quarich catalogue for 1901 and possibly left England after that.

This manuscript, lacking its colophon, can nevertheless be dated to the first half of the 17th century, for the characteristic features of its illustrations and calligraphy, which both seem to have been produced at the same time.

It contains 32 miniature paintings, generally in reasonable condition, though often quite abraded and revealing some later retouching. The paintings regularly break out of the text and picture frame, and employ a variety of different stepped formats.

The illustration programme of the manuscript has quite a regular list of episodes, among which are: Kayumars enthroned, Kay Kavus airborne, Simurgh brings Zal to his father Sam, Tahmina visits Rustam in his bedchamber, Rustam mortally wounds Suhrab, the Fire ordeal of Siyavush, Execution of Siyavush, Rustam kills Ashkabus, Farangis, Giv and Kay Khusrau cross the Oxus, Div Akvan throws Rustam on the rock into the sea, Rustam rescues Bizhan from the pit, Rustam kills Isfandiyar, and Kay Khusrau executes Afrasiyab. There is even a painting illustrating the introduction – of Firdausi presenting his Shahnama to Sultan Mahmud in the garden of his palace in Ghazna.

With such a standard selection of the stories illustrated, one would expect also to see the scene that is the most popular among artists throughout the whole 700-year known history of illustrating the poem, according to the Cambridge Shahnama Project index of scene titles: i.e. the episode, narrating Rustam’s seventh and most important labour – when he, having found the White Demon (div) in his cave, fights and kills him.

Perhaps this mystery can be solved by suggesting that this painting was originally in the manuscript but disappeared before or during the time when it was rebound; the order of the folia was seriously disturbed and the pages were trimmed to fit the new lacquer binding produced in typical Qajar fashion. Both the outside and inside covers of the papier maché binding are decorated with floral designs and two important scenes from the Shahnama: Rustam kills Suhrab and Rustam kills Isfandiyar. Similarly, the Qajar binding decorated with the battle scenes depicting Rustam killing Isfandiyar and Rustam killing Ashkabus replaced the original one of the manuscript produced in 1651 for Shah ‘Abbas II (Dorn 333), now in the National Library of Russia, St Petersburg.

There is, however, another mystery: in the Quaritch sale catalogue of 1901 in the entry dedicated to this manuscript it is mentioned that it had 30 miniature paintings. The copy in its current state has 32 pictures and some of them are either missing or misplaced: a few pages bear the traces of pigments from the paintings that were on the opposite pages, which are not there anymore. A more precise conclusion will be made when a further more thorough study of the text of the whole manuscript is completed.

We draw attention here to some of the more in interesting pictures.

Quite a few paintings suffered from unprofessional ‘restoration’ and wet. Several were not only retouched but ‘improved’ by a much later hand. It is not obvious whether this person was a consistent misogynist, or tried to rewrite the story. For example, in the painting depicting Faridun imprisoning Zahhak in front of his wives, the two sisters (or daughters) of Jamshid – Arnavaz and Shahnaz – both ladies are turned to men, having acquired  dark ginger beards and moustaches while one of them lost her elaborate headgear and acquired a black male hat. On the other hand both kept their long dresses, turning them into some sort of transvestites. It could be possible that the manuscript happened to be in the hands of someone who did not have a sophisticated sense of humour.

Another example is the painting depicting the episode when Princess Farangis, the daughter of the Turanian king Afrasiyab, after her husband Siyavush had been accused of treachery and executed by her father, is fleeing with her son Kay Khusrau, accompanied by the Iranian knight Giv. The particular moment of the story is shown in the picture when all three of them cross the river Oxus (Amu Darya), symbolising the physical border between two hostile countries Iran and Turan, now linked by the young prince Khusrau, who carries the royal blood of both households, representing both countries. The painting follows quite a common iconography showing the three riders crossing the water on the back of their horses.

Compared with the expected scene, where there would be one female figure of Princess Farangis and two male figures of Giv and Prince Khusrau (wearing a crown), the painting in question has all three figures depicted as male. This is also not a unique case. There are similar paintings from other manuscripts, the earliest of them is now in the Library of Leiden University, where the Oxus is crossed by three identically looking black-bearded and crowned men (Or. 494, f. 133v, completed on 15 Ramadan 840/31 March 1437 in Shiraz http://shahnama.caret.cam.ac.uk/new/jnama/card/ceillustration:1010051665).

It seems that the closest to the Shahriar manuscript, in terms of their iconographic details, is the copy from Paris, now kept in the National Library of France (Suppl. persan 490, f. 111r). The manuscript was completed on 30 Dhu’l-Qa’da 1012/30 April 1604, most likely in Shiraz or possibly in Isfahan (http://shahnama.caret.cam.ac.uk/new/jnama/card/ceillustration:1054763167).

It is remarkable that the earliest known illustration of this scene shows Farangis with her face covered, in between the two male figures of Giv, still a young man with moustaches only and her little son Khusrau with no moustaches, who is leading the group. This manuscript is now in St Petersburg, NLR, Dorn 329, 88r, completed on 30 Jumada I, 733/24 February 1333 in Shiraz (http://shahnama.caret.cam.ac.uk/new/jnama/card/ceillustration:-1984990494).  An even more curious comparison could be a painting from a manuscript that was produced at exactly the same time as the Leiden one, now in Rampur Raza Library (P. 3909, M. 493, completed on 6 Ramadan 840/22 March 1437 in Shiraz). Farangis, wearing a crown, is riding a white horse, following her young (beardless and moustache-less) son in a similar crown and followed by Giv in his battle headgear with a black beard and moustache (http://shahnama.caret.cam.ac.uk/new/jnama/card/ceillustration:930224285). Cf. also a year later (11 Ramadan 841/17 March 1438) a representation of Farangis as a purely female featureless character, with no signs of royalty, simply wrapped up in a piece of white shroud-like cloth, led by her son in the crown (now in the BL, Oriental 1403, f. 138v: http://shahnama.caret.cam.ac.uk/new/jnama/card/ceillustration:-222998321).

The most realistic and ‘human’ representation of this scene is found in the Shah Tahmasp Shahnama (f. 216v, 1527, Tehran Museum of Contemporary Art): despite the usual composition: Farangis in bright red is shown not only in the middle but in the centre of the group, which is led by Kay Khusrau, who is depicted as a caring son, looking after his mother: he literally turns back checking if she is successfully struggling with the waves and needs any assistance. Giv is doing the same from behind (http://shahnama.caret.cam.ac.uk/new/jnama/card/ceillustration:-347876183). In the painting from Sydney (Art Gallery of New Wales, EP2 1968, ca. 1590, Shiraz, http://shahnama.caret.cam.ac.uk/new/jnama/card/ceillustration:2147360541) Kay Khusrau is even more attentive to his mother; he stretches his hand to her offering his help, while on the miniature from the Free Library (Lewis O. 52, 145v, February 1588), Farangis is left behind, the painter even cut half of her figure, leaving the other half behind the frame (http://shahnama.caret.cam.ac.uk/new/jnama/card/ceillustration:2147350116).

This is another good example of how the Shahriar manuscript continues a slightly different tradition from the one that was dominant during this period in Shiraz. The story about Rustam chasing, battling and overcoming demon Puladvand, who was half human half devilish, was among the most popular in the Shahnama among its illustrators. Artists were depicting Puladvand either as human, or demon, or demon dressed as human. The overwhelming majority of the manuscripts would have the battle of Rustam and Puladvand representing the half-demon as human.

The Shahriar manuscript preserves an earlier tradition, in which Puladvand has all the features typical of a demon (horns, flaming eyes, claws and hairy spots and very inhuman skin colour, in this case bright green. However, he is wearing human dress (short, knee-long coat, trousers and a belt) as well as human armour – a bow and arrows. He also arrives on his riding animal, which is not a horse as in most of the known paintings: it is some sort of a rhinoceros, which looks more like a cow (even with the neck bell) but with one horn on his nose instead of two on his head.

This makes us think that the closest possible protograph of the image of Puladvand in the Shahriar manuscript could be a picture which is now in the Brooklyn Museum (https://www.brooklynmuseum.org/opencollection/objects/124995/Folio_from_a_Shahnameh%3A_Rustam_Fighting_Puladvand_Div). In that painting, which was a part of a manuscript finished about thirty-forty years earlier, Puladvand also is represented as a classical Persian demon with horns, flaming eyes, blue mouth and bright orange skin, although wearing a human  dress but still having a bell and arm and leg bracelets: Shahriyar’s Puladvand has only one modest decoration, or slave attribute, a wrest bracelet. Puladvand from Brooklyn’s manuscript has also arrived to the battle field riding a cow-like rhinoceros. Although the iconography of the battle itself is quite different: Brooklyn’s Rustam is smashing Puladvand’s head with his cow-headed mace, while he lifts the Pembroke Puladvand over his head - they seem to be the closest in the depiction of Puladvand and his riding animal.

In short, the Shahriar Shahnama provides many interesting points to pursue, both concerning the choice of subjects for depiction, the relationship between text and image, and development of the iconographic traditions of Shahnama illustration. Indeed, like all original manucripts, it is a unique witness to the text and its reception.