Reception of the Shahnameh in the past and in contemporary Iran 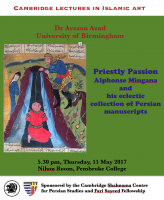 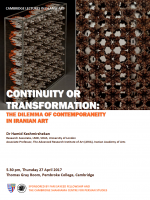 Antiquity in Islamic Egypt: in texts and stones

Antiquity in Islamic Egypt: in texts and stones

As archeological excavations uncover increasingly revealing finds, the study of  cosmetics is coming into its own, no longer as a sideline of costume or aesthetics, but as an independent field, the implications of which extend into the study of rituals, fashions, botany, mineralogy, chemical synthesis, long-distance trade and cultural exchanges, in other words all the essentials of the development of early civilizations. The excavations on the Iranian plateau and in the Bactrian-Margian Archaeological Complex have pushed back the frontiers of the first use of cosmetics to the fourth millennium BCE, even earlier than recorded for ancient Egypt

A one-day conference at Pembroke College, Cambridge and the Fitzwilliam Museum, University of Cambridge

This event is full.

Elite Folktales: a 16th century collection of Persian stories in the Bodleian Library

Bahari Visiting Fellow in the Persian Arts of the Book at the Centre for the Study of the Book, Bodleian Library

Sponsored by the Fari Sayeed Fellowship and the Shahnameh Centre for Persian Studies, Pembroke College, Cambridge

Light refreshments will be served; all are welcome to attend